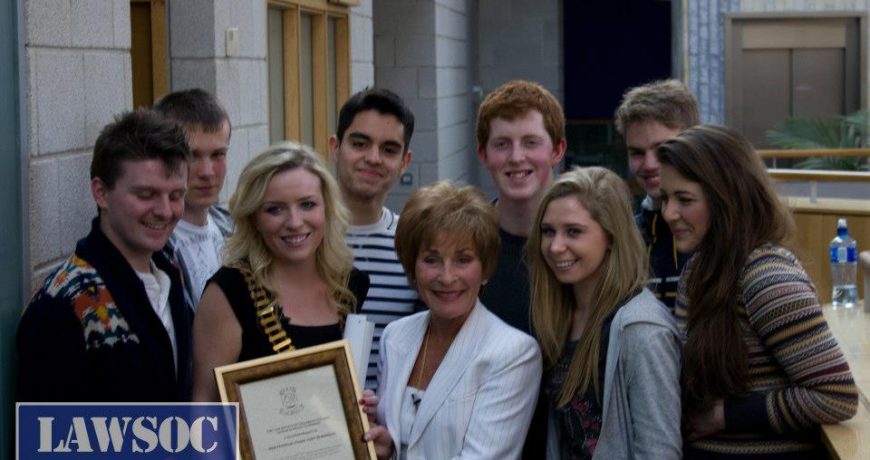 Former US family court judge, Judy Sheindlin whose trademark tough-talking, wit and wisdom, attracts tens of millions of viewers from across the globe to her daytime US TV show Judge Judy has received the award of Vice-Presidency of theUCD Law Society, University College Dublin, Ireland.

“Judge Sheindlin is credited with pioneering an ‘open court policy’ which allows the public and the media to view the day-to-day proceedings of the courtroom.”

Duffy continues, “On an almost daily basis, with her no-nonsense and entertaining personality, Judge Judy reminds her tens of millions of viewers from all around the world that there is a system of rules, known as the law, for regulating our behavior and actions towards one another.”

“I am extremely honored to receive the award of Vice-Presidency of the University College Dublin Law Society,” says Judge Judy Sheindlin.

“Being in such distinguished company is a thrill and extremely meaningful. I have been extremely fortunate to have had two careers–one in the family court and the other in the television court– that I have loved.”

“It’s especially gratifying to be recognized by UCD for my work in the family court where I hope that I made a difference in the system and people’s lives.”

Judge Sheindlin continues, “It’s great to be back for a return visit to Ireland.  My husband and I vacationed here several years ago and were so impressed with the people, the rich history, the terrific pubs and amazing sites. This time we plan to see more of the beautiful countryside and magnificent coastline.”

In 1993, Judge Sheindlin, one of the most outspoken judges in the US, was the subject of a Los Angeles Times article. The story caught the attention of ‘60 Minutes’ and resulted in a segment on the popular newsmagazine show.

Three years later, in 1996, Judge Sheindlin retired from the bench to bring her no-nonsense, quick-witted personality to the US daytime TV series, Judge Judy.

Today, her daytime US TV series is the No.1 daytime show in national syndication. It attracts over 9 million daily viewers in the United States alone, and the show is licensed in over 120 markets around the world.

In 2006, Judge Sheindlin received a Star on the Hollywood Walk of Fame next to the legendary actor Sidney Poitier. She is married to Judge Jerry Sheindlin who served as a Justice of the State Supreme Court of New York.